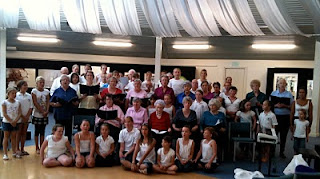 Yesterday was the culmination of Project 1. The Hilda Ross Glee Club and the Rotokauri Tuis, performed together in the 8 - 80 concert as part of the Hamilton Gardens Arts Festival. It was a very enjoyable event, as the audience swelled to nearly 500 people!! Given the venue, I am not sure how well the people at the back were able to hear the choirs, but the level of interest shown by the attendance is potentially indicative of people's interest in intergenerational activities.

Both choirs sang well, with one or two glitches, but they slid by with little notice. The technology worked on the whole, and we did manage to get them all together at the end of the concert. Our national anthem is sung in Maori and in English, and we used a backing track that had been prepared by our Ministry of Education for use in schools. Because there was about a 30-second haka in between the two versions of the anthem, the girls were able to come down off the stage and find their buddy and stand in front of them or on their chair, if the buddy was standing. The image above was taken during rehearsal. I was thrilled beyond words with the concert!!

At the final combined rehearsal, it was hard to get to the singing. Just 13 of the Tuis arrived at the Hilda Ross complex, it is harder for them to get: transport, parents' permission, and time out of school. But the girls who were there made the most of it. They went and viewed one of the villas in the complex and one of the serviced apartments, to see how the Glee Club live. Then we rehearsed our combined pieces, to the delight of our fan club, which swelled for this practice. Manager of the complex, Wendy, came and saw what was happening with the combined group, and was instrumental in getting the head office to print us programmes, a total of 200, which I thought was optimistic :-)

I called in at the venue two days before the concert to see that the risers were there and where the power points were for the children's sound system, and for the keyboard for the Glee Club. To my dismay there was a flat stage, accessed by four steps at one side, which meant that having th Tuis move in with the Gee Club for some of their combined songs was no longer possible. In addition there was the problem of how they were to all be seen. It was one of those late-night light-bulb moments. I set up two rows of chairs on the stage area, and one row on the floor in front. The front row of girls on the floor stood on their chairs, the second row stood on the stage and the third row stood on their chairs. It all worked, except the back row was too far away from the middle row, so the chairs were turned around to back onto the middle row, the girls stood on these to sing, and then had to 'perch' when the Glee Club did their own items, They coped remarkably well!!

The Festival organiser Sarah Beattie, did a sterling job. Helping with setting up the staging for the two choirs and then setting out the audience chairs. I don't know how it happened, but as people arrived, more chairs arrived. The helpers at the Festival are mostly volunteers, and they were fantastic! Chairs set out, and then after the concert, the chairs were all stacked and put away again, probably within 30 minutes of the concert concluding.

This coming week I will hold three focus groups: with the Tuis, with the Glee Club, and with parents of the Tuis, to see what they have said at home about the experience. I have a sense of regret now that the performance has happened.
Posted by Dr Julie Jackson-Gough at 2:31 PM No comments:

A week to Concert

What a year it has been so far. Summer school went very well, with high positive assessment from the students on both the course and my teaching.

Project One
I met the Glee Club for their first rehearsal of the year on January 28th. and then spent ten days in Brisbane catching up with my grandson and his parents.

Tomorrow is my final rehearsal with the Rotokauri Tuis, they will rehearse more with their tutor Susanne. Glee Club will have two more rehearsals. Then we all meet at the venue at 2:00p.m. Friday, to walk through the concert, feel the acoustic by singing in the space, finalise our staging in situ, and hopefully have some time to relax before the concert commences.

Next week I will conduct focus groups with each choir, and with willing parents of the children's choir, getting feedback about what the participants have gained from this musical experience, and then get it written up and submitted for publication!!

Project Two
The contract with Ryman Healthcare is verbally agreed, and now awaiting documents to sign. Advertising has gone out to Auckland University Music Education department, and the Auckland members of NEWZATS, inviting extessions of interest to tutor the group at the Edmund Hillary Complex in Remuera.

I will
Project three
Hamilton Chorale commenced rehearsal two weeks ago, and are well into the preparation for the Celtic Connections Concert. Planned dates for this concert are May 2nd in Raglan and May 3rd in Hamilton.
Members are sourcing some dancers who would like to come and guest at this concert.

Other exciting news for Chorale is that well-known New Zealand composer David Hamilton has ageed to write a piece for us for our second concert, the them of which is: Around the World in 80 minutes

The year is well underway!!
Posted by Dr Julie Jackson-Gough at 11:45 AM No comments: