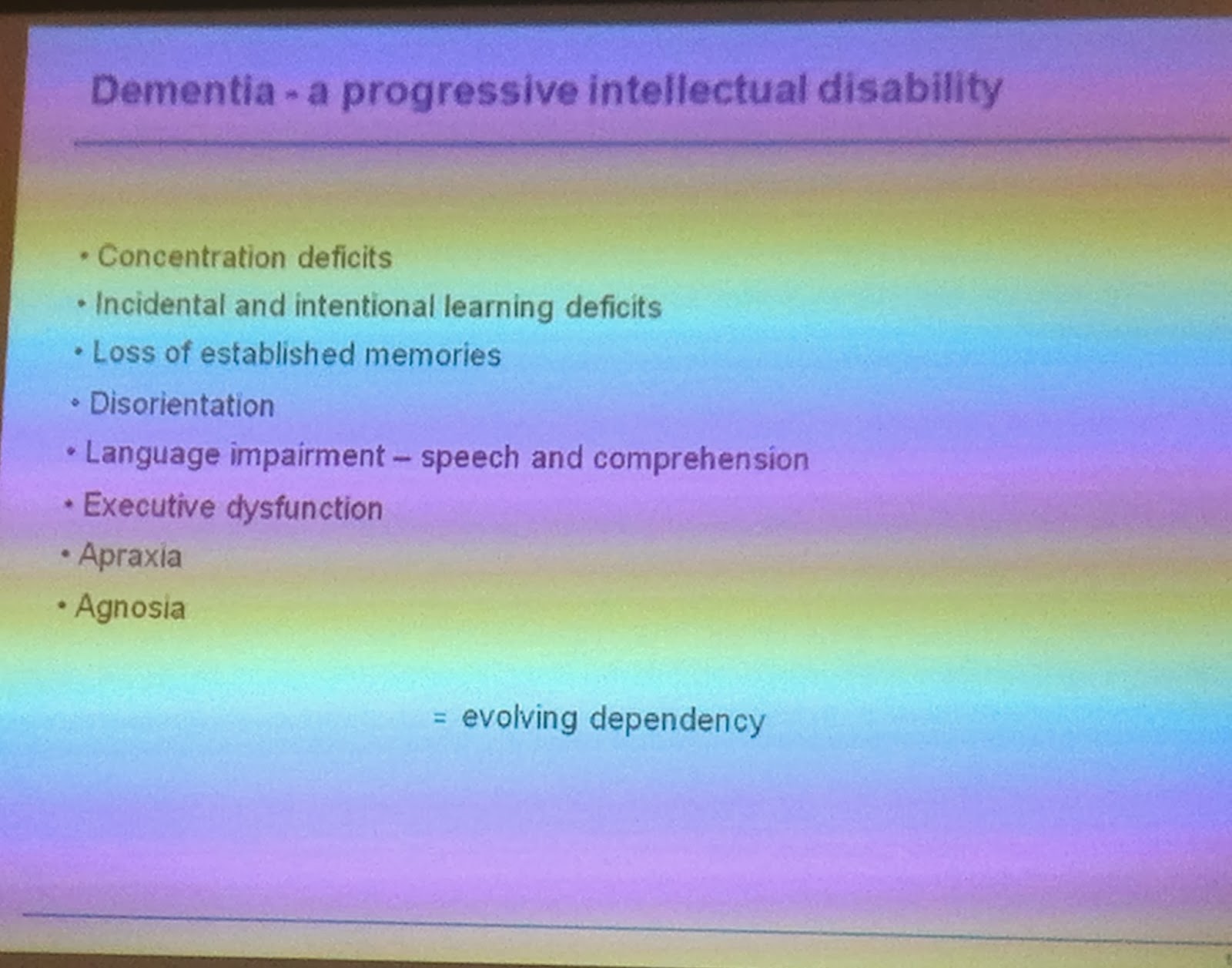 We don't know why dementia starts. It is striking at random. It is a disability. It is a person with a disability. They have rights. The person is still there, it is just that they are disabled. The new always stays strange, so it is good to keep people in their own place. Layers and layers of intellectual devastation. In the beginning it is subtle, changes in concentration. It could be depression, thyroid problems, but needs to be checked out.

Concentration deficits: Capture successes by putting their house number on their door (for Health and Safety, put actual room numbers on the frame of the door). Activities need to be meaningful to the person.

Disorientation: New place, new room, new toileting place. Don't know where you are, or what time of the day it is.

Language impairment - speech and comprehension: What the person with language impairment suffers from is that they are not able to communicate. People can sing when they cannot speak. Sing directions to them, and they may respond.

Executive dysfunction: inability to make decisions for self. It starts right at the beginning. People make very bad decisions. It is an indicator of problems ahead

Apraxia: loss or impairment of the ability to execute complex coordinated movements without muscular or sensory impairment. Loss of coordination, related to dressing themselves, ido-motor apraxia is unable to make a deliberate movement, like pick up a cup, to drink the tea.

Agnosia: loss or diminution of the ability to recognize familiar objects or stimuli usually as a result of brain damage. Loss of meaning, nothing makes any sense whatsoever. Proso-agnosia, means faces all look the same. Babies have agnosia, until they make sense of the world.

He is uncomfortable with people behind him. When he goes out for dinner with his wife, he sits against the wall, and she sits across the table from him.

Performing music: There are few activities that require more of the brain than performing music. It uses complex feedback systems that take in information, such as pitch and melody, through the auditory cortex, and allow the performer to adjust his, or her, playing (or singing).
1.    The visual cortex is activated by reading — or even imagining — a score;
2.    the parietal lobe is involved in a number of processes, including computation of vocal folds; (voice)
3.    the motor cortex helps control body movements;
4.    the sensory cortex is stimulated with each touch of the voice;
5.    the premotor area remains somewhat mysterious, but somehow helps perform movements in the correct order and time;
6.    the frontal lobe plans and coordinates the overall activity;
7.    and the cerebellum helps create smooth, integrated movements.
–     By Steven Fick and Elizabeth Shilts
Posted by Dr Julie Jackson-Gough at 5:36 PM No comments:

I was expecting 60 Diversional Therapists in Wanganui, but there were 75, including four who had driven down from Auckland! They came from Tauranga, and New Plymouth and Wellington. It was most exciting to work with the whole group.

We started with breathing, as that is one of the definite benefits of singing: improved oxygenation. At this point I had someone who tried to take over my workshop. She wanted the people to breathe into their backs, (totally valid for people standing, who have a well developed understanding of the extra breath that is available when expanding the floating ribs) and would not listen to the fact that I was modelling for seated people who could see what they were doing. I had her sing a song, that she suggested, and then was able to control her. She had a very nice voice, and entertained well. Needless to say I am not going to tell you her name :-)

I had duplicated the lyrics to four songs from the first disc, but the CD player that had been supplied was not loud enough for the space, and I was glad that there was a piano available, which I had set up, pulled away from the wall, at an angle, which made the sound bounce off the wall and fill the space.

I had the group set up the chairs against a solid wall as that is the most supportive place for singing. During the session, I asked half of them to experiment with singing in a space, and they noticed the difference straight away, they had to work much harder, and the sound disappeared into the space.

During question time I did not have the current prices available, but when the pastor of the Wanganui Central Baptist Church came in, I was able to get online. The church has a completely unhackable password, but I managed to get all 20 characters in, in the right order.

Many people said that they were going back to their site and going to sign up for the programme. I do hope that they take the graphic showing the brain when listening to music, and when singing, to their manager when they ask for funding.

FYI the do-it-yourself price is $9 a week with chance to cancel at any time, or $7 a week if locked in for 12 months.

To have access to the training for the diversional therapist and the manager it costs $15 a week to cancel at any time or $11 a week if locked in for 12 months.
Posted by Dr Julie Jackson-Gough at 5:12 PM No comments: